Over the past decade I slowly and painfully managed to watch all but the last Power Rangers series, thinking that MegaForce was a good spot to end my torment.

Why did I put myself through all this misery?

I don’t really know. Maybe I wanted to relive my childhood, and I am sort of a completionist, so having stopped watching during In Space, when I was a child, I just was curious to see how in the world they could still be making this show all these years later.

Some of the seasons were horrendous, and some I actually enjoyed, and most were in between..tolerable at best. There is one thing that you could usually look forward to though… hotties. Lots of pretty girls fighting bad guys, or in some cases bad girls fighting the good guys. I noticed that this was actually a hot topic (no pun intended) on the internet, and I wanted to see for myself just who the hottest female rangers are. (Sorry ladies).

So enough chitchat, let’s get down to some beauties.

Welcome to the first ever Tournament of Hotties, where I will be matching up the female rangers from each season against each other to find out who is hotter, the winners moving on to take on the other winners until only one is left!

So here we go…Round 1…Drool!

Note that I will try to only post pictures of how they appeared in the actual show.

Looking at them side by side, there is no comparison. Trini is just blown away by Kimberly. In fact, even when she is not placed right next to a gorgeous girl, she isn’t attractive at all to me (though not at all ugly either).

Then we go right off the bat with an absolutely stunning woman. Kimberly is completely gorgeous. She was the girl every boy in the early 90’s had a crush on, even if they were too young to know that they liked girls, her allure overcame that all. The picture above does a great job showing off her nice body as well.

Trini was replaced in season 2 by Aisha, a better looking girl, so that for a while we had two good looking rangers to watch stomp Putties into the ground.

Then in season 3 Kimberly was replaced with Kat, and viewers were lucky once again. In exchange for a beautiful brunette, we received a gorgeous blond. And while both girls are good looking, only one can move on, and that would be Kat, no questions asked. She would likely shine over any woman that stood next to her. Her hair, smile and eyes all dazzle and can almost hypnotize viewers. Aisha is just on the borders of attractive…Kat is in a different league all together.

At some point in Zeo, Aisha leaves the show and her replacement continues on until Turbo. Since there is really no one to pit her against in Zeo, I’m going to get a bit off track and stand her against someone from Turbo.

At long last we get a very beautiful yellow ranger. Her looks could destroy the previous two, not to mention most women in general. She is quite a pleasure to watch, let me tell you.

Divatox is the main villain for Turbo and I’ve got to say, it’s a nice change from Rita and Zed. That’s a nice bit of cleavage for a kids show that they surely would not appreciate, not to mention the short skirt she wears. Despite her revealing outfit, her mask covers up her face, which makes you instinctively stare at her boobs, which is a good thing and a bad thing because you would probably be staring at her boobs anyway, and you can’t really see how beautiful her face is.

So who is the winner? It’s a tough call, especially when Divatox is wearing such a killer outfit, but even through the mask, you can tell that her face is nowhere as gorgeous as Tanya’s. If you threw Tanya into the large breasted villains outfit, Divatox could not hope to compete. So the winner for this bout is the beautiful Tanya! 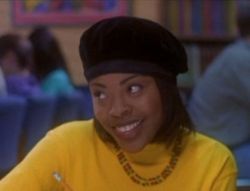 Next up are the two girls that eventually replace Tanya and Kat in Turbo.

Here we have a similar situation from season 1, except the colors are now reversed. Ashley is hot. Really hot. And that’s that. The only bad thing about her is that during the show she is forced to wear her less than flattering space uniform for the majority of it. But when she is on Earth, she treats the audience generously to a nice dose of her abdomen, a lot of the times revealing even more than pictured above, and that’s big points in my book. This is a deadly combo when paired with her penetrating eyes, cute and innocent personality, great body and every other beautiful thing she is.

And just like in season 1, Ashley is paired up against someone not so attractive. Don’t get me wrong, Cassie is not bad looking, but she’s just okay at best. Up there next to Ashley, she couldn’t hope to win.

That’s all for now! Look for Part 2 of Round 1 when I get around to it to see what gorgeous gals will make it to Round 2.