And here we are with another Tournament of Hotties, this time nothing Power Ranger related! Instead, I gathered the 16 hottest women I could think of. But not your everyday hot. These women cause you to think, “They can’t be human, they can’t be from this planet. No human being from Earth could be this hot.”

Now I am sure there are plenty of hotter women out there, but these are the ones I can think of off the top of my head, and I am sure they look quite normal when they don’t have all that make up on either. But that is not the point. These girls are just so inhumanly hot that they must be recognized.

And as wonderful as these women are to look at, it is going to be quite a terrible experience to narrow them down to just 1 that is the hottest of all. How could anyone choose?

Also take note that this has nothing to do with how these women currently look, but is more how hot they were at some point in their lives.

So without further ado, let us begin Round 1. 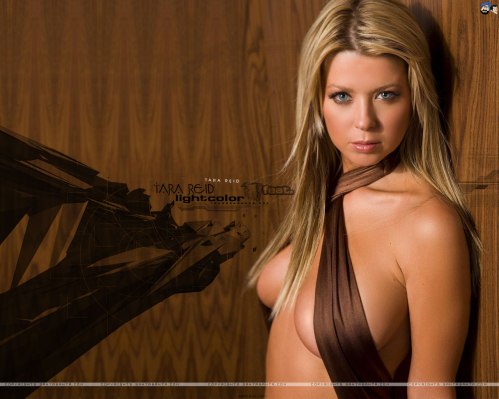 I first discovered this sexy lady in the 1999 film, American Pie, where she looked like this…and please, click on these pictures to see each one bigger… 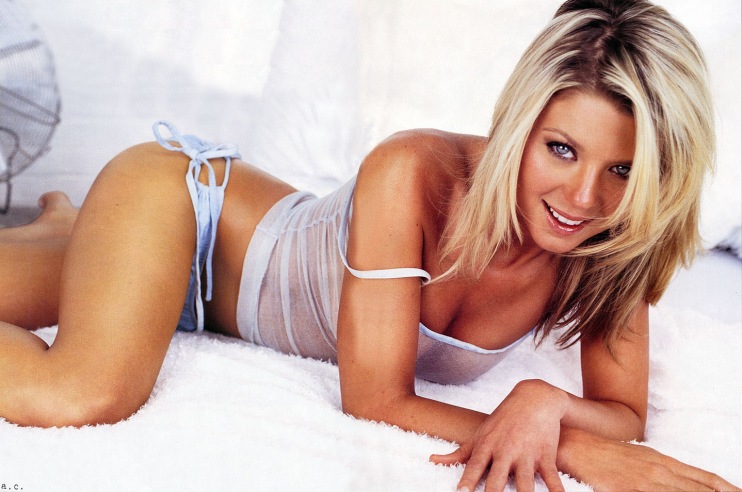 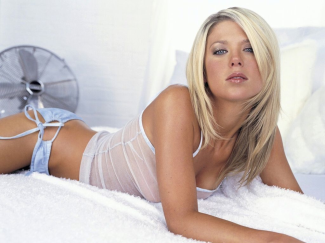 In this movie she wasn’t  “inhumanly” hot, but her raspy voice is one of the sexiest things I have ever heard. Every word out of her mouth sounds like she is trying to seduce the person she is talking to, which makes every man wish they were on the receiving end of those words. I think they even mention in the TV show Scrubs, where she occasionally has a small role, how sexy her voice is. She looks amazing in that show as well.

And when she appears in American Pie 2, her hotness is multiplied. They even point this out, as the main character, Jim says, “And Vicky got hot!” Vicky being Tara’s character. And Jim could not be any more right. She is smoking hot in that film, looking more like this. 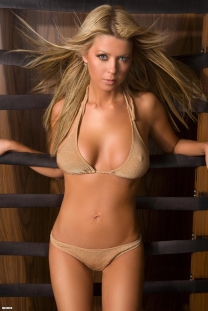 I think the only other thing I have seen her in is American Reunion, where she is also smoking hot, though age set in a tad, unfortunately. But any sane man and some edgy women would do her anyway.

In case you couldn’t tell from her pictures, she is like the definition of a gorgeous blond. Her body is flawless, she has long longs, a nice set of boobs with seemingly very perky nipples as evidenced here. 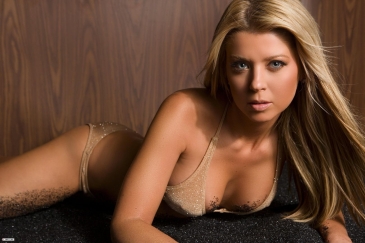 Those little guys are always trying to sneak through! Not to mention two of the pictures in the group above this one!!

So yeah, this girl is hot, unbelievably hot. Every molecule on her body rages sexiness and we can’t get enough. She is also the first girl I have ever seen fake an orgasm on television, and I thank her from the bottom of my heart. Her screams of pleasure through that raspy voice are something that can never be duplicated by anyone else.

And next we have hottie number two…Megan Fox!! The first time I laid eyes on this beauty was on an episode of Two and a Half Men. I believe this was before she was famous, for I had no idea who she was at the time, and no one else did either. All I knew is that when they showed some random girl in a bikini hanging out with the rest of the cast, I thought to myself, “That is the hottest girl I have ever seen.” The whole episode was about how hot this girl was and how everyone on the show was drooling over her. Their acting was top notch, because I can firmly say, everyone in real life was doing the same. Nobody that hot had ever been on television before.

This was a lonnnnnnnnnnnnnnnggggggggg time ago too. She has done nothing but get hotter.

But what really made this amazing looking girl famous was that unforgettable “under the hood” scene from Transformers. You know what I’m talking about, the scene where she is looking under the hood of her car and they pan up her body. 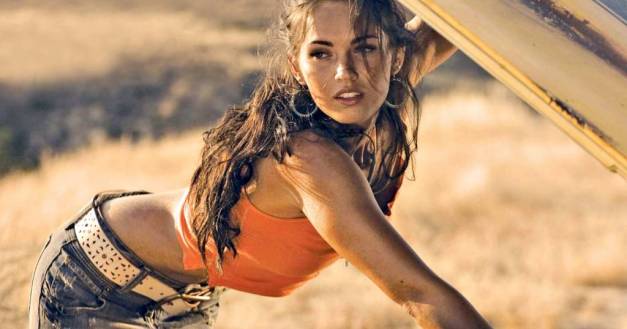 Yeah…that one. I bet you during this scene in the theaters, the whole theater was filled with the sounds of rustling denim as every man adjusted themselves.

I only saw the movie once (not in theaters), years and years ago, and this is all I remember from it. And what else could you take away from it? The moment you see this, it is all you will ever see for the next 3 days!! The way her sexy brown hair falls over her scantily clad body is so sexy. I was skeptical about seeing the movie, and every time I heard about it or asked about it, all I ever heard was “Megan Fox is so hot!” And that is how she became world renowned. But it wasn’t for many years later that I found out this new name everyone was talking about was the same girl I had subliminally fallen in love with from Two and a Half Men.

Everything about her is perfect. Everything. Every time she moves, every time she speaks, even stinking blinks, her hotness infests your brain. I honestly don’t know how every man who has seen her in person isn’t in jail for sexual assault. How could anyone resist such beauty?

She is inhumanely hot and sexy and seems to have been born that way. Even without makeup I guarantee this girl is smokin’. I can’t even get over it. I wish I could meet someone 1/4 as hot as her. That girl would be by far and away the hottest person I’ve ever met.

So now the daunting deed must be committed. Which of these alienish women is hotter. The blond or the brunette?

It’s very close. Either one would fulfill any man’s wildest fantasies, but I would have to go with…

Now that I have shamed one of the hottest blonds of all time, let’s see what two amazingly hot women are next…

Well crap, two more impossibly hard to choose from women. Let’s start with Scarlett. The first movie I ever saw her in was The Avengers, where she played the role of the incredibly bad ass, yet amazingly sexy and impossibly hot Black Widow. In fact, the first scene you see her in, she’s in a black dress that she looks simply amazing in.

See? I told you so. Right then and there, I realized she was one of the hottest women on the planet.

She first appeared as the character in Iron Man 2, where she looked amazing, but I wouldn’t go as far as to say she was inhumanly hot, though she definitely was rocking the costume and was still gorgeous. 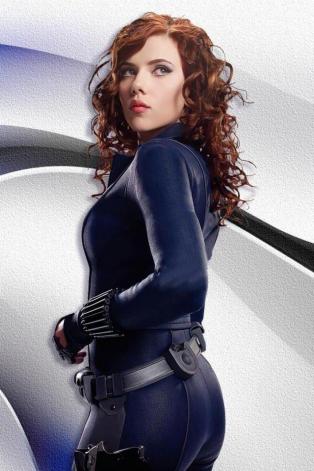 It wasn’t until Avenger’s that she reached such a high level of hotness, and hasn’t slowed down a bit. She’s every bit as gorgeous in any of the other movies she plays the role in, if not hotter.

I have never seen her in any other movie, in any other role other than Black Widow, so I find myself wondering if it is just the character that is so hot, or the actress?

She is stunning no matter what she’s doing it seems. Wow, just beautiful. There is just such a tough, sexy look about her, yet a sort of innocence as well, like she isn’t trying to be sexy, it just radiates from her naturally. She’s got a nice rack too, so that’s nice.

And next we have the amazing beauty, Jessica Alba. The first movie I saw her in was Good Luck Chuck, and man was she gorgeous in it. One can’t help but fall in love with her looks as well as her charming, adorable personality. I haven’t seen many other movies with her in it, but the ones I have, she is always beautiful and sexy, and usually strips down to nearly nothing. An old co-worker of mine was so in love with her, he kept a copy of Into the Blue on his desk, a movie in which she appears on the cover like this… 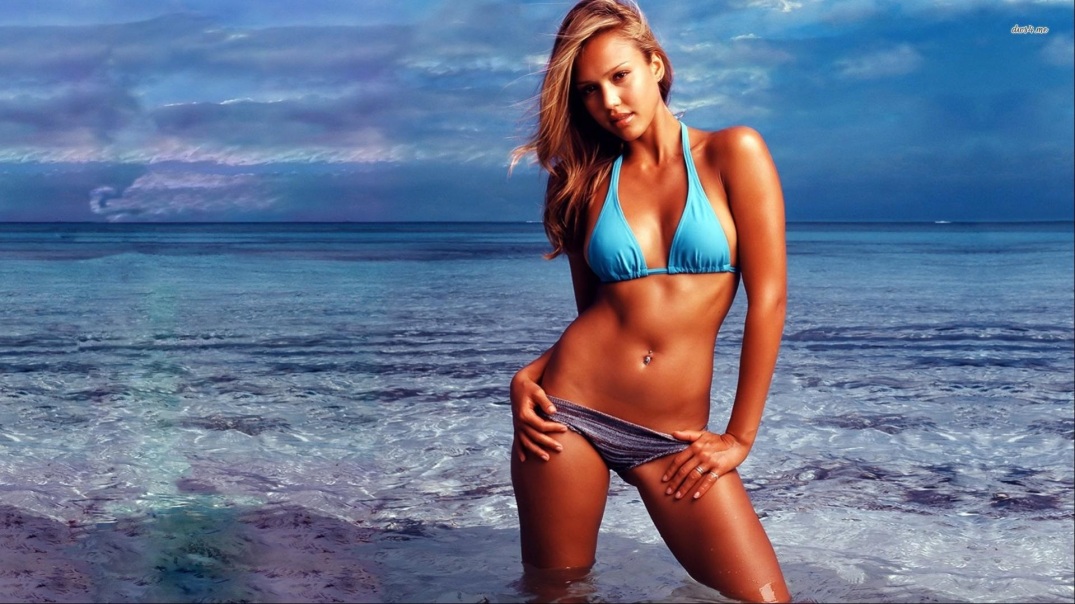 Everything she wears, she looks amazing in. As you can tell, she has a perfect body and looks especially amazing in bikinis. 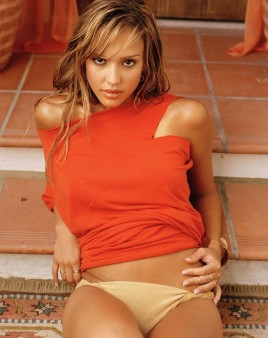 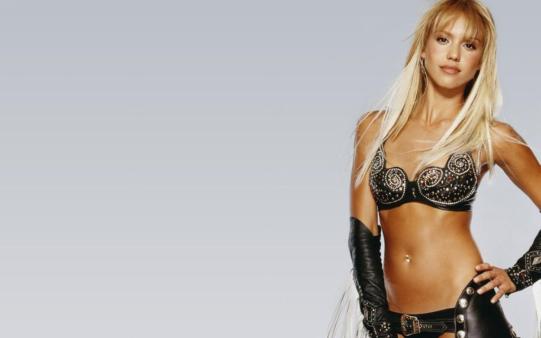 But she looks great in underwear and leather as well. I’ve never met her, but based on things I have read about her and how she acts in movies, she is not only gorgeous on the outside, but on the inside as well, and that is bonus points, baby!

So which of these super women will move on to round 2? It is a close one, but this girl is a tad bit hotter…

See you next time, as we continue with Round 1!