The more one watches the same film, the more their opinion changes, or so I’ve noticed. You may like a movie better each time, or like it less, noticing things that you may have missed the first few times viewing it. Also, once you know what to expect, you can go into the movie with a suitable mind set and severely lowered expectations.

I recently discovered just how much an opinion can change when I watched The Amazing Spider-Man 2 for the third time. The first time I watched it…in theaters…I thought it was awful garbage, save for the 3 scenes Spider-Man was in it. It doesn’t help that I saw two movies in the theater that day, Captain America: Winter Soldier was the first I saw, about a half hour before ASM2. That, being one of the best super hero movies of all time, might have really crushed Spider-Man’s movie looking any good at all.

The second time I watched it, I was prepared for it’s disappointment and I actually found it good, though nothing great. This might be because I watched the other 4 Spider-Man films before it, and I find Sam Raimi’s trilogy to be far superior to the two newer ones, which may have shown me how lacking ASM2 was, much in the same way Winter Soldier did.

But the third time I watched it, I only watched Amazing Spider-Man before it, and this time around, I found the movie to be quite excellent, like an 8 out of 10 excellent.

So with this knowledge, I hesitantly bought The Last Jedi, a film that completely ruined a series I adored my whole life. What made me even more hesitant is that each time I watch The Force Awakens, I like it less.

So did I like this film more or less?

I would have to say more. And I didn’t watch it with any other Star Wars movies, where as the first time, I watched all 7 leading up to it. I didn’t hate the parts with Luke in it as much, and the casino scene didn’t seem as long as I remembered.

Do I like the movie now? No, not really. By itself, I have to say it is a solid movie, but when you remember it’s connected to 7 other movies, I can only just shake my head. When I remember Luke is acting so un-Lukeish, then those scenes become worse to me. But I tried to forget the other movies and I almost liked it. Sort of…

The plot is still boring, the lack of anything interesting going on is still annoying, but the movie is easy enough to sit through and that is all that counts.

Though there are 3 points in the movie that I swear the characters are talking to the audience. 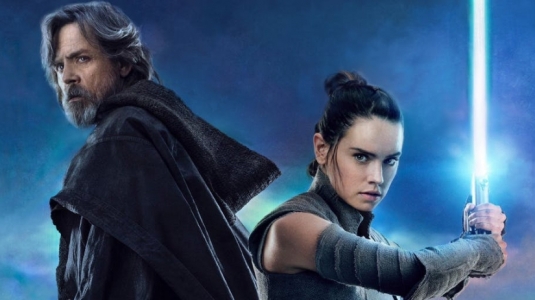 The first is when Luke tells Rey “What? Did you expect me to walk out with a laser sword and face down the entire First Order?” Not an exact quote but something like that.

This feels like the writers calling out the fans who wanted to see Luke kick some serious tail with unbelievable Jedi power. It’s basically telling us to shut up, that’s not going to happen, and just for thinking that, we aren’t going to make him do anything and then kill him for no reason at all. So hah! Dumb fans.

The second instance of the characters talking to the fans is when Kylo is yelling at Rey to forget the past. He is really telling us to forget about the other movies and all the lore and characters and everything that the main plot of Force Awakens was built around and focus on Rey and Kylo and their relationship and growth of power. NOTHING ELSE MATTERS!!

I sadly don’t remember the third instance, but it’s in there!

It is painfully obvious that the original characters were only put into the movies to sell tickets, and now they are killing them off as fast as possible. Carrie Fisher saved them the trouble of having to kill off Leia, but you can bet Chewie is probably going to blow up in the Millennium Falcon with R2 and C-3PO in the next movie.

But anyway, yes, it is better the second time around, so now I am wondering if third time’s the charm…

Ironically, though I liked it more the second time, I have even less interest in seeing Episode 9 now for some reason.