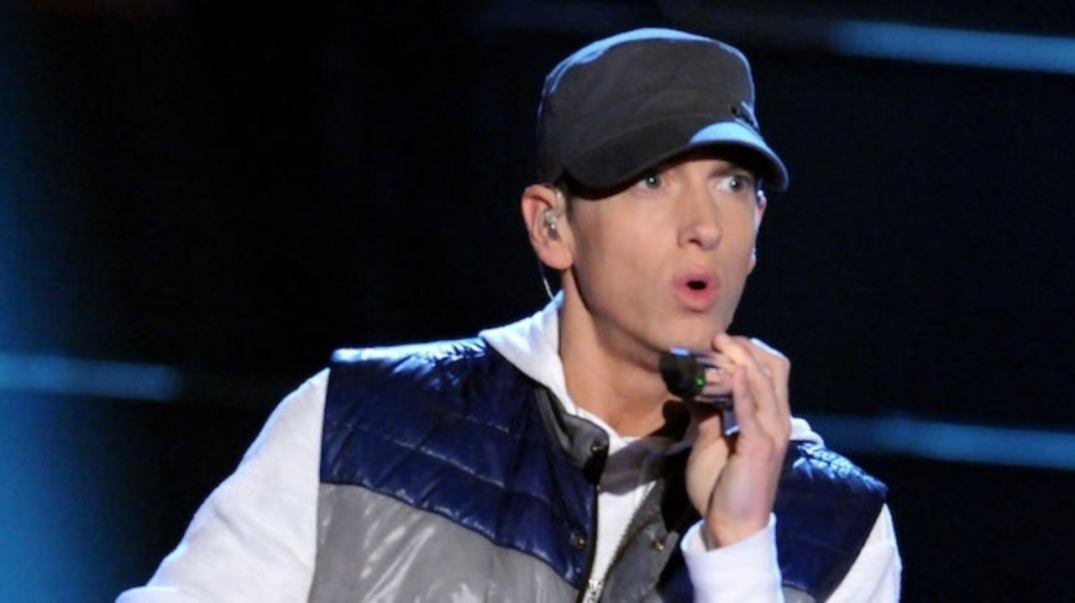 In my opinion, Eminem is by far the greatest rapper to ever live. I’m just going to say that flat out. If you disagree with that, okay. Makes no difference to me.

But nobody is perfect. While 99% of Eminem’s songs are good to incredible, he has slipped up a few times over the years. So I thought it would be fun to compile a top 10 list putting a spot light on his 10 worst songs (in my opinion).

-Okay, it was actually hard to find 10 bad songs, so I have to stretch it a little bit.

This song isn’t bad at all. I actually like it. I just don’t really like the chorus that much, and compared to the rest of Recovery, this song jumps out as the worse by far.

Again, this isn’t a bad song whatsoever, I just don’t love the rhythm he raps with in the first verse, even though it is reminiscent of the actual Jimmy Crack Corn song. And it has 50 Cent on it, and I absolutely hate him, so that doesn’t help. The chorus is a tad annoying too, but nothing that really hurts the song.

Yet again, this isn’t a bad song. It’s just kind of boring. He tells a story about his origins at a slow pace with an unexciting beat under it. This is all fine, it’s not one of his best, and again, it was hard to find actual bad songs.

I expect you’re tired of hearing this, but this is not a bad song either. The issue is that half the song is a phone call with Maxine, who is a prostitute basically, and you can barely hear anything she says. And I guess just rapping about a whore isn’t great source material to me. But yeah, it’s still a decent song.

This song isn’t horrible either, it’s just okay. And weird. It has some indian beat, and he raps with a slight indian accent or something. The lyrics are kind of all over the place as well.

This song borders on being bad. It just has not a lot going for it. I don’t really like the beat, the chorus is maybe okay. But the main body just sounds messy at times, especially at the end of the song. It’s also weird that he talks in the perspective of a black guy, which makes it difficult to take the song seriously.

I don’t know what he was thinking with this song. The song features Jessie Reyez more than Eminem, and she has the worst voice I’ve ever heard. It is scratching on a chalk board in human form. She is a terrible person and should never sing again.

But anywho, it’s a very short song, and half of it seems to be intentionally weird and bad, which makes it almost forgivable. It’s pretty obvious they didn’t take the song seriously or put a whole lot of effort into. So basically, they should have just cut it, cuz intentionally bad is still bad.

This has a slow, marching beat to it. So like Yellow Brick Road, this is a very boring song. And Em gets all political, complaining about war and whatever, which doesn’t really suit him. On top of that, the song isn’t catchy at all, there isn’t any great rhymes. It’s just…ugh…

These next two…these are really the only two songs I can truly say are absolute terrible.

What was he thinking with this one? This song is just stupid. It’s like he wrote half a song, went into the booth and just muttered a bunch of stuff in between to make a full song. It’s just 5 minutes of bad. But it does have one of his most offensive lines of all time in it, which is both hilarious and really mean.

This song makes Rain Man look good. That’s how bad it is. I have no idea what he was trying to accomplish with this one. It has no purpose, there is no message. He just says random things,  the rhymes aren’t great, the beat is slow and boring. There’s nothing redeeming about this song at all.

There you have it. I probably would have been better off doing a top 5 worst songs, since I like most of the ones on this list, but oh well. 5-10 bad songs over a 20+ year career is a pretty good record, I’d say.