I was recently asked to do a list of my favorite Disney movies. If you know anything about Disney at all, you know there are more than a few handfuls of these, so I will be splitting them into two lists, one for live-action, and one for animated. I will be keeping it straight Disney, which certainly means absolutely no Marvel, Lucasfilm, Pixar, Fox, or whatever the heck they own nowadays. I’ve actually already done lists for Marvel and Pixar anyway. This list will also not include any of the recent live-action remakes of old animated movies, as I have not seen any of those.

Okay, so I haven’t seen this movie in a long time…probably not since 2001 as a matter of fact. But I remember really liking it and watched it like three times in a week. I was also 12 at the time, so my opinion now could be vastly different. But I’m putting it on this list anyway, because there are very few movies, if any, where I can say I’ve watched it that many times in such a short period.

I have seen the first and third only once, but the second is the only one I ever owned, and I loved watching it. It’s funny and exciting. The hockey team is chosen to represent the US in some kind of tournament that I can’t remember, so off they go to a different country, while learning to work as a team. The wildly diverse cast makes everything a lot of fun to watch. This movie has given me an appreciation for hockey. 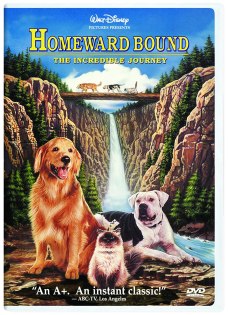 A movie about animals who can talk among themselves sounds cool enough, but when they think they’re abandoned and have to travel across a brutal and dangerous mountainside and return home miles upon miles away makes it sound even cooler. The main characters are diverse and likeable in their own ways. Each has strength and weaknesses, and they must use these strengths and make up for the other’s weaknesses to find their way home, even though if they just waited, they would have saved themselves the trouble. 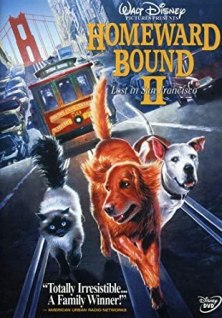 These three animals tackled the treacherous mountain ranges, but how will they fare against the big city, where they must face dog catchers, blood-thirsty dog gangs…and love…again, all things that could have been avoided if they just stayed put. It’s amazing how these animals can be so dumb, and yet so awesome.

If Lara Croft was a man, who also wasn’t Indiana Jones or Nathan Drake, they’d be Nicholas Cage in this exciting and intense adventure..

Another clever journey, but with even more danger and excitement. Wahoo!

For some reason, my middle and high school had us watch this movie like 10 times in a variety of classes, and I never knew it was Disney. At first glance, this seems like a stupid football movie, but it is so much more. A bunch of racists have to play football with some black folk. They start out enemies but eventually become brothers. Then they go along their final year in school, dealing with all the troubles kids do back in the 60’s or 70’s I think it was, with all sorts of dramatics. It is quite emotional and entertaining.

Finally, an awesome pirate movie? But with undead curses, incredible action, and fierce, strong lead characters and high stakes? Damn…I was blown away by this movie.

This one just barely squeaks ahead of the first one. It’s a bit more intense and darker, and flippin’ nuts with a lot of cool effects on the characters.

This is the most ambitious and thrilling of the three. There’s pirate wars, sea monsters, sea witches, violence, heartbreak, a not-so-happy ending. Just awesome.

So yeah, obviously I really enjoy the Pirates series. I haven’t seen the last two yet, but I’m willing to bet they would take up two of these spots as well.

There are a lot of great Disney live-action movies, so this was a tough list to be sure, but these are probably the 10 that have brought me the most enjoyment in my life.