And I’m back, bringing you a few more incredible albums! 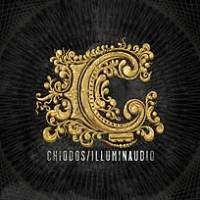 Chiodos is certainly a unique band and are really quite talented. Of the four albums they have made, “Illuminaudio,” their third album, is without a doubt the most ambitious and enjoyable album to date.

I was very worried when this was being made. The bands singer, whose unique vocals ranging from low to very high pitches, mixed with the occasional aggressive screams, really brought the keyboards, unique guitar riffs, and overall excitable music together, had left the band, as well as their drummer. I just kept thinking to myself, “how can they make a Chiodos album without Craig Owens?” But all my worries and doubts were immediately put to rest after the first song, which was just a short intro thing that couldn’t even really be considered a real song. I knew I was in for a really great album after the first actual song, “Caves” came on. Right away it starts with a neat little drumbeat that immediately warmed me up to the new drummer. Followed right after that was a glorious high pitched chant by the new vocalist.

By the end of the song, I was floored. Not only was the new vocalist a much better singer, having cleaner transitions between high and low singing, much better screams and just an overall more pleasant sounding voice, the band as a whole were much more together if you will. The songs were smoother, more advanced and better written. This was at times absent from their older albums, where they often times just randomly jumped into odd music transitions, and the vocals were just cracked and screechy at times.

On top of all the better quality, every song was just incredible. When you listen to it, the still unique and satisfying vocals just seem to carry you along the notes of the equally unique music until you find yourself at the end of the album, sad that it is over, but overjoyed that upon owning this album, you have the privilege of listening to it as many times as you want.

This is another perfect album and I recommend it to pretty much everyone. I am sure you will find something in this amazing album for you to love.

Alkaline Trio is one of my favorite bands, if not my favorite. They have been around for 20 years and have come out with quite a few albums in that time. Many of them take the band in slightly different directions, but their core elements of hard punk and heartbreak always stay in tact. Perhaps this is why this is one of the few bands out there that have remained consistently good throughout their entire career.

That being said, there is no denying however that some of their albums are definitely worse than others. This brings me to their last album before “My Shame Is True,” “This Addiction.” While this is still a good album, to me, it is without a doubt their worst. This left me slightly disappointed, and when “My Shame Is True” came out, I wasn’t all that quick to pick it up. But when I finally did, I found myself yet again stunned by my favorite trio. They introduced yet another style in this album, but as ever, keeping faithful to their core sound and energy. Though this was their best sound in my opinion, taking elements from all their previous albums and combining them into this one amazing one. I always felt it combined the writing style of “This Addiction,” the creativeness of “Crimson” and the pure foot tapping catchyness of “Agony & Irony.”

One song after the other was never alike, always trying something a little bit different, yet familiar. Some of these songs quickly became my favorites out of all the many, many songs they have created. And even though they combined a lot of their previous styles, each song is laced with something new, making the album stand out and exciting to listen to. I now eagerly await their next one, but now with the worry that it will not live up to this one, but it is Alkaline Trio, and everything they do is wonderful.

I highly recommend this to everyone. They have found such a balance in many forms of music that everyone can find something to enjoy.