Continuing on with the Tournament of Hotness…

We covered the hottest girls from Mighty Morphin’ to In Space in part 1, so let’s keep going through Round 1 to find the girls who will further advance

This is the season that starts the trend of new Rangers every season. Let’s see who this brings. 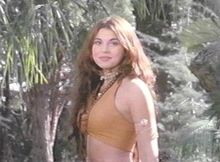 This is another “no contest” bout. Maya is extremely good looking, and to the viewers pleasure, she wears a revealing little jungle outfit the entire season which exposes much of her torso and a cute loose skirt to complete the outfit. And man does she look great in it. Her pretty face, long wild hair and fantastic body in that outfit make her a force to be reckoned with.

Which is why it is sad to see Kendrix face her.She is another ranger that I do not find attractive at all. This is especially so when placed right next to the beautiful Maya. Though I might not find Kendrix all that attractive because I just realized she sort of resembles my cousin…huh…

Anyway, without any doubt, our winner! 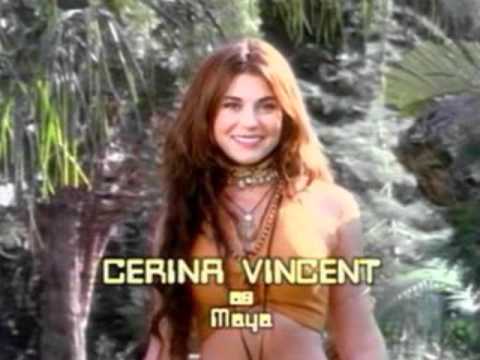 At some point during the season Kendrix is killed off or something, thus we needed a new pink ranger. Now as we don’t have any other female rangers to go face her, we are going to need to once again borrow a villain from the same season. 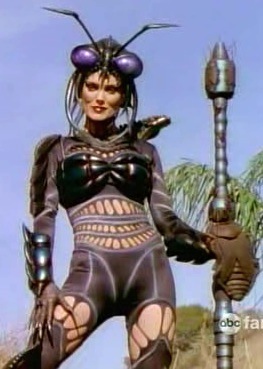 (Warning!! Spoilers for In Space/Lost Galaxy)

Karone, was the main villain for In Space, and she was a pleasure to watch.

What with all the leather and constantly changing hair colors and styles, she was certainly fun and intriguing to watch. Fortunately when she joined the rangers in Lost Galaxy she dropped the crazy hair and stuck with nice straight beautiful blond. But she did hang on to the black leather as her main costume in the show, making her a very welcome replacement for Kendrix. She is one hot cookie! Like seriously.

Up against her is the main villain’s daughter who soon becomes the main villain herself, Trakeena. For being the daughter of a big nasty scorpion alien monster, she’s pretty hot. Luckily for us, she doesn’t really have much of a monster costume, and really, not much of a costume at all. It’s more like sexily ripped tights that once covered her whole body, showing you she is definitely human and not some gross bug. The only insect like parts on her are some kind of shell-like bra which is cool and some buggy headdress which isn’t overdone and almost complimentary to her outfit, but really, we are not looking that high on her anyway.

So who is the hottest…friend or foe?

Definitely Karone, without a doubt. She’s just too hot. She would beat out Trakeena as Astronema as well, though thank you Trakeena for giving us hot villains as well as rangers for the third season in a row! Moving on to another season presents us with two new rangers, and man is it disappointing. 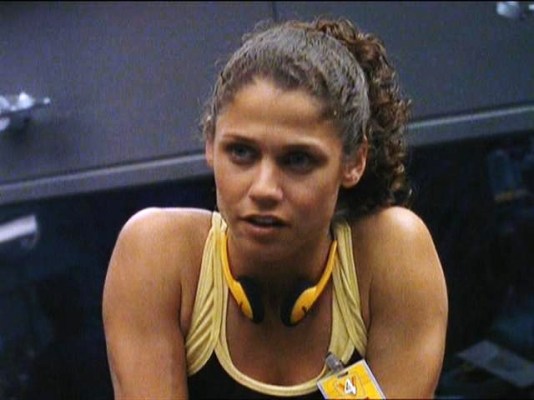 On top of this being one of my least favorite seasons, the two women starring in it just aren’t that attractive to me. I don’t know why either. Neither of them are unattractive in the slightest, but I just really don’t find them that appealing.

Both of them have nice, toned bodies and whatever, but I don’t know. Looking at these pictures, I have to say that this one looks better though.

The last bout was so disappointing that I wanted to do another bout from Lightspeed Rescue, even though they are not power rangers, but both of these next women are so hot that they deserve a chance to win.

These two are the real shining beauties of this season. I mean, just wow….they are both smoking hot. Ms. Fairweather is some kind of scientist, always working on ways to improve the rangers abilities. But why in the world did they have to cast someone so hot? Why couldn’t she be a ranger? Thankfully, when the rangers are not out fighting monsters, she is usually nearby gracing the screen with her unbelievable beauty. This also makes you extremely jealous of the green ranger though. I mean seriously, look at those lips in the above picture. He is one lucky man.

When the rangers go out to save the day, leaving the beautiful Fairweather behind, it doesn’t come as such a loss, for they usually end up facing Vypra at some point. Now the actresses acting is really quite terrible in this show, like cringe inducing, but you don’t even care, because her stomach is screaming over her bad acting, yelling “look at me and how gorgeous I am!” Despite her bad acting, her body is amazing, thus you can’t wait until she is on screen again. Her costume, with a metal bra and wings and black leather pants, is really quite sexy.

I don’t know why, but I love her. Probably like I said before, that exposed midriff just gets me.

So which of these ridiculously good looking women can move on? I’m going to have to go with Ms. Fairweather. Her face is just so perfect, I could melt. I love those lips and hair as well. If only we could see her in Vyrpa’s outfit…

This season is actually pretty good. But how are the girls? 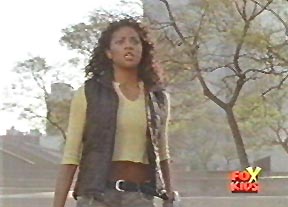 This is another one with a clear victor. Katie is not bad looking at all, she even has a bit of midriff exposed, but she just is not attractive to me.

Jen on the other hand, is gorgeous. She reminds me a lot of Kimberly and if those two had to face off in this tournament, I wouldn’t know who to choose, they are so alike.

Jen really rocks the tight leather, putting Karone in her place, though this is actually how she appears in one episode Wild Force, but I wanted to post it because she looks super sexy in it. Not to mention she is just a stunning human being to begin with. She is also the first non red ranger to be the leader of the Power Rangers, though red pretty much takes over anyway. Jen is just a hot gal and Katie doesn’t stand a chance.