I fell in love with Kingdom Hearts the second I played it. It came to me at the right time in my life. I had always wanted to like RPG’s but for the most part found them far too unnecessarily complicated with all the materials, controls, traveling, stats, and spells. I wanted to love them, for I like big stories with a bunch of characters and all that, but it was never worth the time getting to learn the complicated systems of the games.

Then Kingdom Hearts found me when I was around 12 or 13 years old, and I had been delivered what I had always hoped for. An RPG that takes all the best elements and dumbs them down significantly, while combining it with action adventure, my favorite genre.

On top of the ridiculously clever gameplay and opportunity to visit places from the movies I watched so often growing up, I found there was an incredible story being told throughout, making the series original characters some of the best fictional characters I have ever seen, somehow completely overshadowing the beloved Disney characters.

I beat the game and loved it. When KH2 came out, I had missed Chain of Memories and found the story all quite confusing and overwhelming at first, but despite having no idea what was going on, by the end of the game, I gathered the gist of it and realized I had just finished one of the best games I have ever played, with THE best story line, told in a positively convoluted, confusing, and delightful way that I adored.

I remember beating it, watching the secret movie for BBS and wondering what the heck it could all possibly mean. The moment I beat the game, I immediately took to the internet to research Kingdom Hearts 3 and when it would be coming out. Little did I know that I would be waiting for over a decade.

But that’s not to say we weren’t treated to nothing in all that time. Firstly, I immediately got hold of Chain of Memories, which helped ease some of my confusion, but then I still waited for several years to get a new game…a DS game by the name 358/2 Days. Immediately I loved it just by reading the title, it was so ridiculously cryptic and weird, the things I love about KH. This game finally told us what all that Roxas business in the beginning of the second game was about, and gave us a deeper look into all the black coated fiends you slaughtered in the two previous games.

Then to my delight we were treated to another game, Birth By Sleep, less than a year later. But I soon found myself despairing, for it was a PSP exclusive, something I didn’t own. But forget that, I needed to play it. At last I would learn what that secret video from KH2 was all about, so I bought the KH special edition PSP solely for that game and still have no regrets in doing so. I played this game for hours upon hours. I don’t even want to know how many.

And then again in a year, we got another game that finally told us what the message in a bottle said at the end of KH2 and at long last advancing the story beyond 2, not a prequel to it.

3 games in the span of a year. We were finally being rewarded for all our patience.

Then we had to wait nearly another 2 years for the game that set us up for 3, the big one, the conclusion. 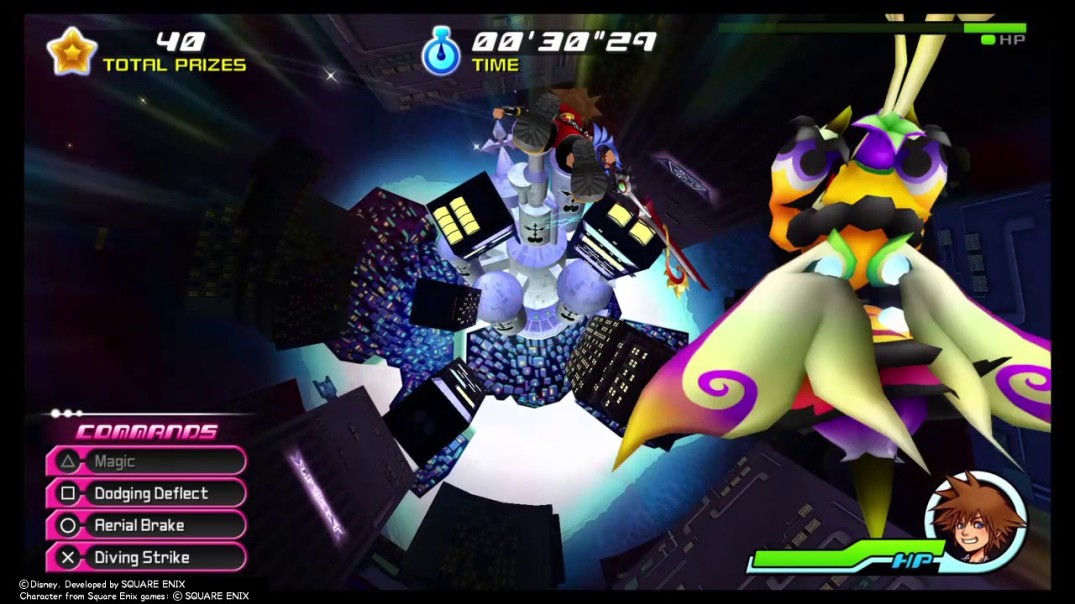 After completing Dream Drop Distance, I had that same feeling I did when I first beat KH2. But the PS3 came and went with no KH3 to be seen.

Finally, after a 7 year wait, the game is released and I couldn’t believe it when I started to play it. And then I found I couldn’t stop. Finally, after a week, I beat it and the conflict that started back when I was 12 years old has finally been concluded now, when I am 29, nearly 17 years after the first game.

I loved the game, and I loved the ending, but now I feel so empty. What do you do when something you have looked forward to for more than half your life ends?

Yes, there is more to look forward to, but it’s like I have finally grown up. The 12 year old kid in me has finally moved on, vanished like a heart disappearing up into Kingdom Hearts. I am ecstatic that I beat the game, yet at the same time, was so terrified of beating it the closer I got to the end.

I realize this is just a video game, but the story and it’s characters have always meant so much to me, beyond any book, game, movie or any other form of media has ever reached me.

I feel similar every time I beat a Kingdom Hearts game.  It’s like spending time with those characters was something truly great to me and the time I spend playing these games will always be cherished. But like how Sora has to say goodbye to his friends every time he leaves a world, I too must close this chapter on my life, and make room for a new adventure.

So I guess I am trying to say, thank you Tetsuya Nomura for bringing to life such a fantastic story, Square-Enix for making such a fun game, and Disney, for allowing them to use your characters to kill a bunch of monsters.

If you make one person feel the way I do about KH, on any form of media, for any product, then the creators of that media have done their job and should be proud.

Thanks again, I can’t wait to see what else you bring us!